The WAH Theatre, in the Grand Ballroom at
The Williamsburg Art and Historical Center,
Presents:
As part of the 400 Year celebration of John Milton 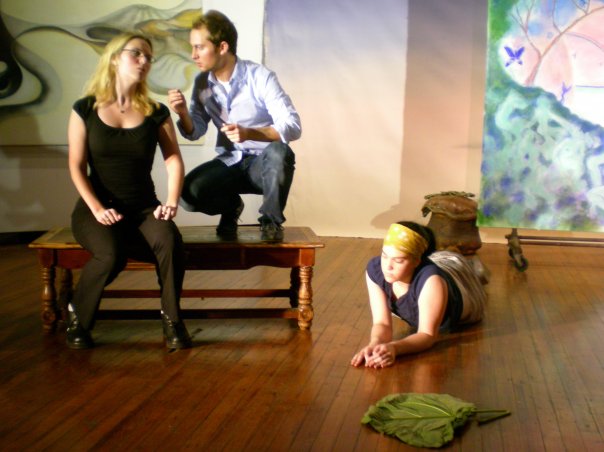 Peter Dizozza is the director of the newly reopened WAH Theatre. The Theatre's prior productions include Prepare to Meet Your Maker, The Golf Wars, The Eleventh Hour, and The Sea Heiress. He is a composer/writer who performs monthly song sets at SideWalk Bar-Restaurant. In 2007 La Mama E.T.C. produced his musical play, TentagatneT. He is a member of the Dramatists Guild and The Lambs Club and gratefully acknowledges their assistance.

Maria Micheles's plays include SleepOver, Ms. Un-Beauty Pageant, Round &Round the Night Park, Through the Red, Ambivalence, the Audience, and her work has appeared at Actors Studio, Theater for the New City, Ensemble Studio Theatre, Brecht Forum, Manhattan Theatre Source, Bowery Poetry Club, Siberia, Galapagos, Gotham Arts Improv. Maria has also worked with Brooklyn Playwrights Collective to put up the festivals After Artaud, Beyond Brecht and is now working on their new Chekhov festival, which will go up this December 2008.

Alaina Hammond's off-off Broadway credits include: Les Hunter's Apoapsis (Molly), Maria Micheles' Reunion(Claire) and Sentence To Write(Paula), Ed Malin's Return of the King(Priscilla), Tribes of
Maronii(Domino), and A to Z(Al). She appeared at the Upright Citizen's Brigade Theatre in Tanglewood (Viv) and Young Republicans (Staunch Republican). She wrote Nancy, To A Point (directed by Amy Carr), a semi-finalist in The Strawberry One-Act Festival. She wrote the off-off Broadway plays Awkward Girl Gets Hugged, Trust Overrated, And Then Came The Cranes, Active Healthy Bonding, Future Dreams of You. Look for her "Dr. Chekhov, Gunshot Expert" in BPC's Confronting Chekhov Festival.

Jane Shufer has stage managed the recent O Happy Three 2008 Production at Manhatttan Theatre Source, as well as the recent theatre productions of The Entertaiment Committee of The New York City Bar Association.

The Brooklyn Playwrights Collective is a workshop and theatre group of emerging playwrights from Brooklyn and Queens. They workshop weekly in Park Slope. What unites this diverse group is their urge to create an alternative to traditional "theater-centric" events by incorporating other types of experimental performance and musical shows onto the stage.

Paradise Found will perform at The Williamsburg Art and Historical Center (135 Broadway at the corner of Bedford Avenue-look for the mansion by the Williamsburg Bridge) on October 3, 4, 10 &11 from 8:00-10:00.

The audience is encouraged to visit the WAH Center's Paradise Lost Art Exhibition!
Come to the Landmark Museum Mansion on the corner of Broadway and Bedford Avenue.
For more information, please visit:
www.wahcenter.net